I literally could not have gone through it without the breathing exercises I had practiced so many times.

I tried hypnobirthing when my first baby was born, but ended up being pressurised into an induction, and the hypno side of things just didn’t happen for me.  The contractions came very fast and furious and I lost control.  I had an epidural and suffered quite serious tearing, and although I delivered my baby naturally, it wasn’t a good experience for me and the baby was stressed throughout.

When I first started talking to Sarah I realised she had a different approach.  Hypnobirthing is not about going into a trance (although that could be a part of it, if you want!).  It starts with informing yourself about what will happen before, during and after the birth, and crucially, knowing your rights as parents when it comes to your maternal care.

On my mind then when we talked with Sarah about what we did and didn’t want during the birth of my 2nd child, was the induction. Sarah backed up reasons for non-intervention with stats 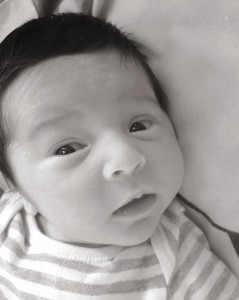 from the WHO, and I realised that I had the right to control everything about the birth, including any interventions but even down to small details regarding the environment you give birth in, and who should be there.

The big day drew closer; I was practicing the techniques and visualisations we had gone through with Sarah; I was 3cm dilated and baby was fully engaged.  3 sweeps later (another topic we had discussed in our preparations), there was no sign of baby sister.

Eventually for medical reasons I decided to have an induction but this was different: I felt that it was my decision and I was in control.  I consented to them breaking my waters, but not to the pessary or drip.  I wanted to take my time and not be rushed.

The contractions started but not strong enough…too bad.  Me and my partner put some stand-up comedy on the laptop in the hospital, got out the snacks and settled in for the long haul.  The midwife thought we were mad…clearly wanting to speed things up she suggested the drip several times.  But we weren’t convinced, and so stuck with our decision.

Eventually things were moving properly and the pain became very intense.  I literally could not have gone through it without the breathing exercises I had practiced so many times.  They didn’t make the pain go away of course, but they made it easier to control.  This was the crux of what we had missed the first time round – control of the pain, of the decisions made, of awareness of things going on around us. Throughout the whole thing my partner asked questions, informed the midwife what we wanted, and made sure the few key points we had planned in advance were followed as we wanted.

I think there is always a bit of chaos when the time comes to push, but our gorgeous Marlie certainly arrived in the world in a much more calm, relaxed environment than big sister.  What made the difference for me was Sarah’s holistic approach to birth, which is extremely factual, incorporating her own experiences and those of the mothers she works with. Self-confidence is key.

Thanks so much Sarah x

About The Positive Birth Group